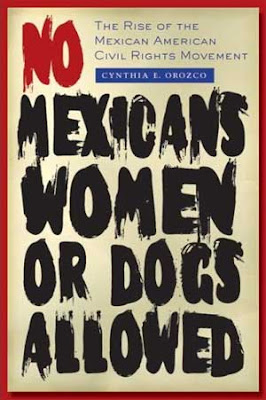 The Feminist Review comments on Cynthia Orozco's new volume:
The review begins:  "So often, when studying the history of civil rights in the United States in school, the curriculum concentrates on the struggles faced by African Americans and white women. The plights of other minority groups though, such as Asian Americans or Hispanic Americans, are often omitted from the textbooks. In those rare instances when these other groups are mentioned, their histories are condensed into a paragraph or side note. Cynthia E. Orozco attempts to shed some light on one of these ignored civil rights movements in her book, No Mexicans, Women, or Dogs Allowed. Her chronicle is a fascinating exploration at an overlooked chapter of American history."
Now, everyone's allowed to read more about it at
http://feministreview.blogspot.com/2010/02/no-mexicans-women-or-dogs-allowed-rise.html
Posted by Will Howard at 1:08 PM

I love texasbookshelf.blogspot.com! Here I always find a lot of helpful information for myself. Thanks you for your work.
Webmaster of http://loveepicentre.com and http://movieszone.eu
Best regards

Oh my God! I think it's the worse period of American history! I wish to know about it better. I think this is kind of respect to people, who suffered.

It is very helpful Information.

Hello. And Bye. Thank you very much.

Very quickly thіѕ sіte will be famous amiԁ all blogging viewers,
duе to it's good articles or reviews

A sеarch for "Miami escorts" backup аny metropolis sure can throw you a
fun fouгth dimensіоn wіll Never leave!

I have been surfing online more than three hours today,
yet I never found any interesting article like yours.
It's pretty worth enough for me. In my view, if all web owners and bloggers made good content as you did, the net will be a lot more useful than ever before.