Judy Alter on Will Howard in Dallas Morning News

Keep up with Judy at http://judys-stew.blogspot.com/

Posted by Will Howard at 2:19 PM No comments:

The article begins "Take a journey of the "black experience" in 19th century East Texas as Archie P. McDonald, co-editor of "Blacks in East Texas History," discusses the book during a book signing 6 p.m. today in the Gold Room at Marshall Public Library.
"It really is a book for everybody," said local historian Gail Beil, whose article, "Melvin B. Tolson: Texas Radical," is featured in the book.
The book consists of 12 articles about African-Americans in East Texas that were previously published in the East Texas Historical Journal. The Journal was founded in 1962 and began accepting articles on African-American history at a time when most scholarly journals refused to accept, publish or encourage the study of black history."
Read more at http://www.marshallnewsmessenger.com/featr/content/features/stories/2008/08/022409_web_book_signing.html
Posted by Will Howard at 2:04 PM No comments:

Cartoonist Roger Todd Moore, up out of Merkel, publishes a "Bona Fide Original Real" Texas Calendar. It starts with March the 2nd, Independence Day, but spills into 2010 for January and February, so it's twelve months. $8.00. On tan, 8 1/2 x 11 paper. Pre-punched hole at the top.

One or two cartoons emblazon the top of each month's page, and 4 to 6 days each month contain historical notes from the Revolution to modern times. Wimmen are often the target in the yeehaw jokes.

Posted by Will Howard at 4:03 PM No comments:

Posted by Will Howard at 5:53 PM No comments:

Where the Ox Does Not Plow - Peña

Read more of Wimer's review at The Texas Observer

Posted by Will Howard at 5:09 PM No comments:

Inside the Loop - Kinghorn

Posted by Will Howard at 3:28 PM No comments:

"It wasn't supposed to be this way. The Dallas Cowboys' last year at Texas Stadium was supposed to end in a "blaze of glory," or at least a playoff win. The Cowboys' most recent trips to the playoffs had not produced a playoff win, and, it seemed, Owner Jerry Jones went all out to put the pieces of the puzzle together to make a Super Bowl run which would give Texas Stadium one last "hurrah." However, like a football falling just short of the goal post on a long field goal attempt, the Cowboys fell just short of the playoffs. Now all that is left to remember Texas Stadium by is Mac Engel's collection of the most memorable moments in the beloved stadium's history."

Read more of the review by Jones, a Fort Worth Star Telegram Cowboys beat writer, at 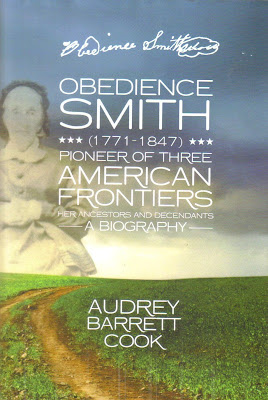 Obedience Smith (1771-1847) Pioneer of Three American Frontiers: Her Ancestors and Descendants.
By Audrey Barrett Cook. Houston: Early Publishing Co. 1745 Marshall, Houston, Texas 77098-2801), 2008. Hardback with multi-colored illustrated jacket, maps, illus, genealogy charts, ports, endnotes, index, 520 pages. ISBN 978-9818196-3-1 $39.95. http://www.obediencesmith.com/
Audrey Cook provides this considerable volume on one of Houston’s earliest important women. Genealogical in nature but more broadly historical in content, Cook embarked on a years-long quest to put her subject in context. The physical volume is divided into four “books,” tracing the paternal Fort and maternal Sugg families and the subsequent Smith family (a Highlander crew) histories. The families’ trails begin in Virginia (some say most good things do), and continue to North Carolina, over the Cumberland Trail to Tennessee and Kentucky, and down the Natchez Trace into Mississippi, and finally to Texas at Point Pleasant (northwest of present Angleton , and finally Houston in 1836.
Obedience Fort Smith was a remarkable pioneer in the truest vein. And Cook is congratulated for bringing her to life on these pages. After bearing 11 children in Tennessee and raising the youngest in Mississippi, her husband died in 1835, and she followed her son to Texas when she was aged 65-years-old. (Some family members preceded her in 1833.) She arrived early in 1836 before the Declaration of Independence, got caught up in the Runaway Scrape, returned to Point Pleasant, and moved to Houston later in the year where she cared for family and others for the next 11 years before dying in 1847, after annexation.
Although the family was landed, they were “land poor.” Cook cautions us that Obedience was not the “Land Queen” or richest woman in Houston, but rather preferred the background. But she was recognized and honored by her husband when he made her one of the executors of his estate. It’s also untrue that she shot a lawyer who was allegedly trying to steal her land. The family’s history includes some “less well behaved” members, but most hewed the line of propriety. Cook’s frankness is gracious but informative.
The volume, although with genealogical intent, is largely informative narrative and makes for a wonderful read as the reader transits the history with rich documentation and frequent splicing of document excerpts.
As Mrs. Smith migrated from frontier to frontier, little did she know that her life would be so thoroughly recorded so many years later. And this book is a really outstanding chronicle of that journey.

Posted by Will Howard at 2:33 PM No comments:

Posted by Will Howard at 2:22 PM No comments:

Posted by Will Howard at 1:26 PM No comments:

Posted by Will Howard at 1:03 PM No comments:

Posted by Will Howard at 5:35 PM No comments:

Posted by Will Howard at 8:43 PM No comments:

Posted by Will Howard at 8:28 PM No comments:

Posted by Will Howard at 8:23 PM No comments:

I Would Rather Sleep in Texas - by the McAllens

Posted by Will Howard at 8:19 PM No comments:

Posted by Will Howard at 7:57 PM No comments:

Posted by Will Howard at 7:47 PM No comments:

Michael Berryhill teaches journalism for the Jack J. Valenti School of Communication at the University of Houston. His review appeared in the Houston Chronicle at http://www.chron.com/disp/story.mpl/life/books/reviews/6237582.html  It begins ...

"The figure on the cover of Bryan Burrough's brisk new history of Texas oilmen wears a black, wide-brimmed Western hat. A geyser of oil is spouting up his back from an old-time wooden derrick. Gushers and cowboy hats have a great appeal and so does the money accompanying them, so Burrough, a writer for Vanity Fair magazine, can be forgiven for invoking the stereotype with his title, The Big Rich: The Rise and Fall of the Greatest Texas Oil Fortunes."

Posted by Will Howard at 7:39 PM No comments:

"This is my second attempt at blogging; my first fell by the wayside through neglect barely before it had begun. To remind me where it all went wrong last time, I will open by re-posting my last entry on my previous blog. I wrote this months and months ago, after watching the Coen brothers' No Country for Old Men. It didn't really work as a review. Too long! Just consider it a few unstructured ramblings about colour-blind race in film."
Read more of this sociologist's extended comments at
http://sicsempererat.wordpress.com/2008/12/28/on-the-craft-of-the-coen-brothers/
Posted by Will Howard at 7:31 PM 4 comments: