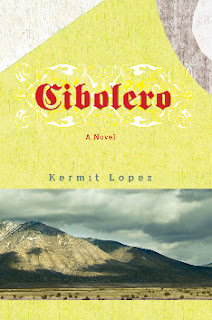 La Bloga and Charlie Vázquez: Latino Musings on Literature review the Kermit Lopez novel, Ciboleros.
La Bloga begins
"I'll start by going out on one of my habitual limbs to say I'd nominate this one for the Premio Aztlán Literary Prize. No, I don't think it's as passionately written as last year's winner, Across a Hundred Mountains by Reyna Grande, but hell, she raised the bar so high, authors are going to be scrambling for some time to catch up with her."  Read more at
http://labloga.blogspot.com/2007/11/cibolero-by-kermit-lopez-review.html
Charlie Vazquez begins
"Kermit Lopez's Cibolero is the story of Antonio Baca, a retired cibolero (buffalo hunter) born and raised in 19th-century New Mexico via several generations of what were, at the time, Mexican citizens. But once the American Civil War is over, American expansion takes a turbulent turn, and what had once been New Spain and indigenous lands before that are violently incorporated into the United States of America. Antonio's family is ambushed by Texas Rangers while he's away. They try to kill his son and kidnap his daughter Elena. Determined to return her to his family, he sets out on a "hunt," tracking her vicious captors through the dramatic landscapes of the southwest territories, before it's too late."  Read more at
http://charlievazquez.wordpress.com/2010/01/29/latino-book-tour-%C2%A1cibolero/
Posted by Will Howard at 7:24 PM